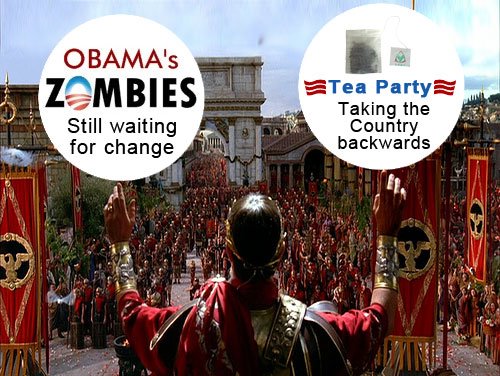 Which Group is Worse for America, Obama Zombies or the Tea-Baggers?

Whenever I criticize conservative political ideas I am often called an Obama Zombie and when I criticize the liberal political ideas I am called a Tea-Bagger, without any consideration that there are more than just two ideas in this country. The Republican and Democratic Parties are but two sides of same coin. They do not serve the American people they enslave the American people.

I think it is quite possible that Barack Obama will be the last President the American people will see. It appears that we are completely prepared as a country to enter into the authoritarian phase of empire. The system is almost completely broken and the only way to maintain power is to either release grip on the throat of the American people or become a fascist state, a dictatorship, whatever you want to call it, the results are the same.

The elite keep power by using the Divide and Conquer rule, thus we have the Obama Zombies and the Tea-Baggers fighting each other in the back seat as the elite drive the car off the cliff. The Golden Age of our empire has passed and only an act of god will stop this train wreck that is about to happen. Now I do not believe in god so my outlook on these facts is pretty dismal.