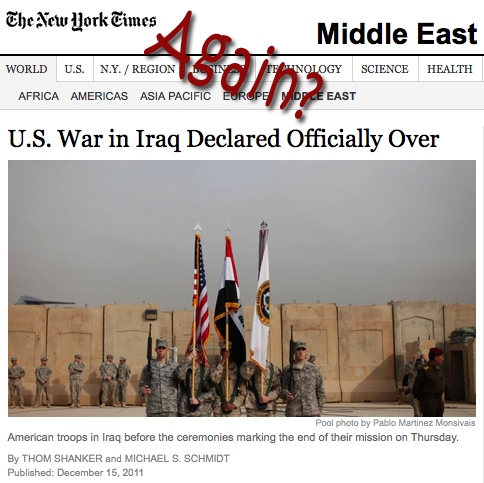 For the third time and after an eight-and-a-half-year-long occupation, the US has declared an end to the Iraq War. The United States is leaving behind a $6 billion embassy and diplomatic effort to be run by the State Department and staffed with thousands of private contractors.

While the US may have withdrawn all of the military troops in Iraq, they have left behind an army of private contractors (mercenaries like Blackwater and such) that are more expensive than the US military and are not held to any types of law, military or otherwise. It may give many great comfort knowing the war is over but in reality not much is changing on the ground in Iraq. Billions of dollars will still be funneled into that black hole without any type of oversight. The citizens of Iraq will continued to be terrorized and murdered. The con game continues.

There are so many things to address in this video so I tried to keep it to just one of the glaring propaganda efforts by the military. An although PBS reported two headlines about the Iraq war they failed to connect the dots. I am talking about the headline that the war was declared over the very next headline says that the US House, today approved next years war budget for Iraq. If the war is over why do you need a war budget?